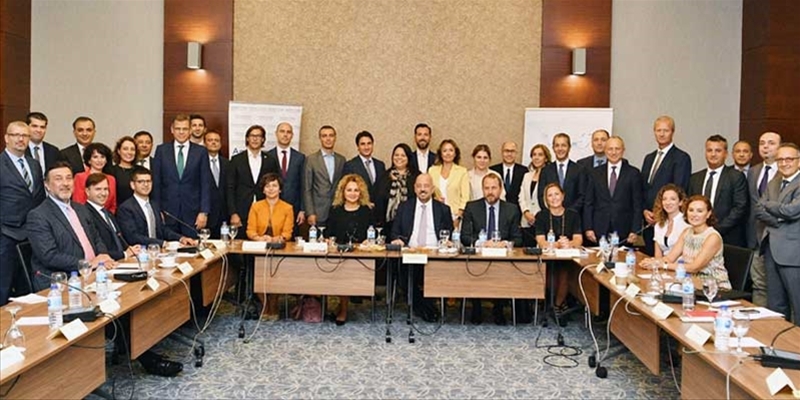 Expectations for the 100 billion-dollar bilateral trade goal between the United States and Turkey were discussed prior to the US Secretary of Commerce Wilbur Ross' visit to Turkey beginning on September 6, 2019. Representatives of the companies member to the International Investors Association (YASED) and AmCham Turkey/ABFT shared their opinions in the 'USA-Turkey Investment and Trade Relations Consultation Meeting' organized with the participation of Rıza Tuna Turagay, Deputy Minister of Trade, and representatives of the Presidential Investment Office.

"International companies choosing Turkey as the regional center would grow the economy and boost employment as well as exports. Turkey always stands by international investors." said Turagay. Osman Okyay, Board Member at YASED, said "If Turkey's competitiveness as a regional investment center was improved, the number of incoming international direct investments with added value would swiftly increase." Serra Akçaoğlu, Chair of the Board at AmCham Turkey/ABFT, said "Increasing the number of American investments in Turkey would make great contributions towards reaching the trade volume goal."
Some of the expectations conveyed in the meeting by US-based companies that have investments in Turkey are as follows: "Holding a Turkey Investment Conference in Istanbul with the participation of global executives in order to raise awareness regarding investment opportunities in Turkey, establishing contacts with state chambers of commerce, signing a Preferential Trade Agreement or Free Trade Agreement between the two countries, reassessing and revising the avoidance of double taxation agreement between the United States and Turkey currently in force, strengthening the position of Turkish Start-ups and SMEs in the global supply chain by carrying out activities to integrate them into the sales channels of American companies, implementing all legal and executive regulations with the public-private sector consultation mechanism and ensuring predictability..."

Speaking at the meeting, Deputy Minister of Trade Tuna Turagay stated that they were aware of the issues international companies encounter. "We will overcome these issues over time. Companies choosing Turkey as the regional center would grow the economy and boost employment and exports. One should not only look at it from a foreign trade perspective. Next week, US Secretary of Commerce Wilbur Ross will arrive in Turkey and meet you. You will describe the problems you encounter, but I also urge you to describe Turkey's potential. We always stand by investors." said Turagay.

The number of platforms for companies to come together should be increased
Stating that sustainable trade relations between the two countries are of critical importance with regard to strengthening investments, YASED Board Member Osman Okyay has said that the number of incoming international direct investments with added value would will swiftly increase if Turkey's competitiveness as a regional investment center is to be improved. Okyay has stated that positive campaign activities towards Turkey should be carried out in order for American investors to invest and enter into joint ventures in Turkey more frequently, and continued:
"As was the case in 2018, the number of platforms in which company executives and prominent Turkish and American officials, starting with the President, can meet should be increased. Improving Turkish industrial companies' share in the global supply chain and their international competitiveness would contribute to the increase of bilateral trade on the Turkish side. It is important that Turkey benefits from its supply chain potential to a greater extent. We think that, in addition to products, service exports to the United States with added value also have potential. Focusing on areas that would improve bilateral digital trade such as e-commerce, internet and mobile services, and ensuring that the related legislation facilitates trade for companies would result in an increase in trade between the two countries. Additionally, it is important that American companies regularly monitor opportunities specific to their sector, and that the government provides the necessary incentives to transform opportunities into trade."

Reminding that a series of meetings were carried out with stakeholder NGOs with regard to the USA-Turkey bilateral goal of reaching a trade volume of 100 billion dollars, AmCham Turkey/ABFT Chair of the Board Serra Akçaoğlu has stressed that increasing American investments in Turkey will make significant contributions toward meeting the trade volume goal. Akçaoğlu has stated that four main topics are present in the report drawn up by Boston Consulting Group (BCG) within the scope of these meetings. Reminding that the issue on how to increase American investments in Turkey is a major subject of the report, Akçaoğlu has said "The report also features the topics of promoting Istanbul and Turkey to global companies as a regional center, sending clear messages about the investment environment, holding an Investment Conference with wide-ranging participation and inviting speakers who would take the impact to the highest level. In today's meeting, we have taken the opinions of the representatives of American companies that have investments in Turkey. As stated in previous meetings, we, as AmCham Turkey/ABFT and YASED, are ready for cooperation with regard to strengthening the commercial and economic relations of the two countries."

Free Trade Agreement should be signed
After the meeting's opening speeches, company representatives shared their proposals with regard to meeting the USA-Turkey bilateral goal of reaching a trade volume of 100 billion dollars. The proposals that stood out were as follows:

● A Turkey Investment Conference should be held in Istanbul with the participation of global executives in order to raise awareness regarding investment opportunities in Turkey
● Contacts should be established with state chambers of commerce
● A Preferential Trade Agreement or a Free Trade Agreement should be signed between the two countries
● The avoidance of double taxation agreement between the United States and Turkey currently in force should be reassessed and revised
● Legal and executive regulation in line with international standards should be implemented with the public-private sector consultation mechanism and predictability should be ensured
● Short-term, medium-term and long-term plans for agricultural products, in the manufacturing of which Turkey is a leader, should be reassessed and planning and supporting activities should be carried out in order for FDA requirements to be implemented with regard to these products
● "Bilateral procurement and/or production" alternatives should be assessed as a solution to the issues of capital, technology and high hurdles in entrance to knowledge-intensive industries with regard to access to the US market
● The position of Turkish Start-ups and SMEs in the global supply chain should be strengthened by carrying out activities to integrate them into the sales channels of American companies.