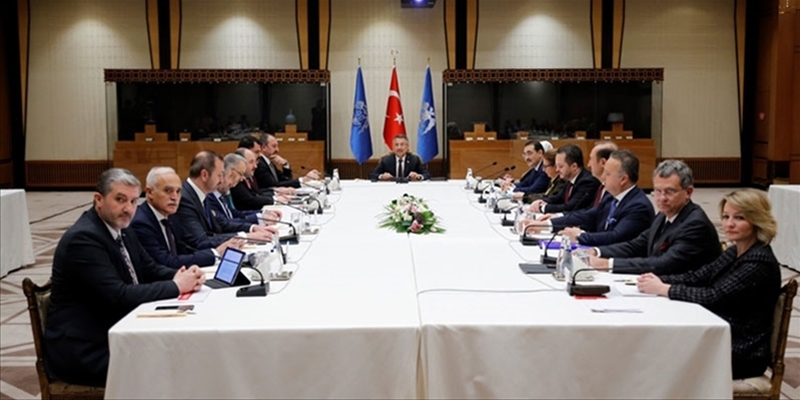 Ayşem Sargın, chairperson of the International Investors Association (YASED), attended the meeting of the Coordination Council for the Improvement of the Investment Environment (YOİKK), chaired by the Vice President Mr. Fuat Oktay, organized on April 25 at the Presidential Complex.

Taking the floor to open the meeting, Vice President Fuat Oktay stated in the meeting that, they would decide on the activities to be carried out in the upcoming term and identify ways and methods to further the work done by the Council until then.

Vice President Oktay expressed that the experience accumulated by the Council, which he described as one of the most concrete manifestations of intersectoral cooperation, through the support of member establishments would provide an insight for the new term.

Following Oktay’s opening speech, the meeting proceeded as a closed-door meeting. In her speech, Ayşem Sargın said, "When we take a look at the Action Plans from the last 5 years, we can see that almost 40% of the items in such plans were transposed from YASED’s agenda. We will sustain our determination to continue supporting YOİKK’s efforts in the new term. The duty assigned to YOİKK under the new regulation issued in March indicates that the main function of YOİKK is to jointly improve the investment environment in collaboration with the private and public sectors. To this end, we believe it is quite important for the private sector to be involved in and contribute most efficiently to the process of both identifying the fields to improve as well as proposed actions, and realizing and carrying out such actions.

I would like to emphasize the importance of establishing action plans on increasing the influence of YOİKK in the new term through a full agreement between public and private sectors, and of private sector participation in the application phase for the action plan via a proactive approach.

As YASED, we believe that YOİKK’s operations should be carried out with a focus on "identifying actions required to increase the international competitiveness of the business and investment environment in our country, and developing and applying policies and proposed actions." Based on this, we believe it would be useful for YOİKK’s efforts to focus on three main areas:

2. Other topics towards improving the investment environment, including micro and operational fields,