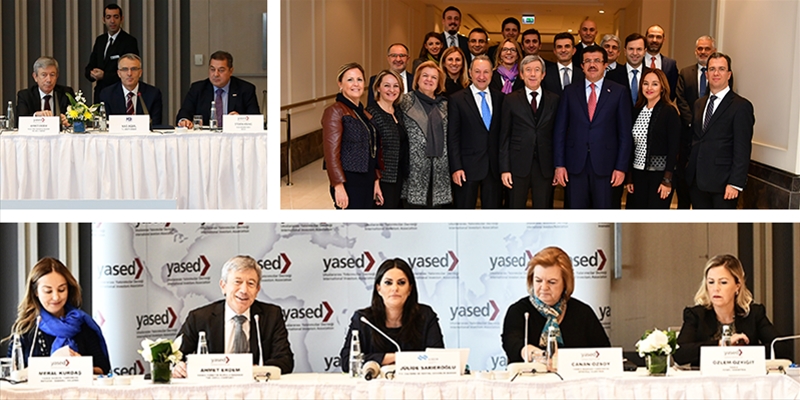 YASED (International Investors Association) held a series of consultation meetings; with the Ministry of Finance on November 16, 2017, Ministry of Economy on November 21, 2017 and Ministry of Labor and Social Security on November 30, 2017. During these meetings, key topics on YASED agenda were discussed with the related Ministers and their high-level ministry officials.

The Minister of Finance, Mr. Naci Ağbal, attended the consultation meeting organized by YASED in Istanbul on November 16, 2017. The meeting, closed to the press, was attended by  YASED Board of Directors and the chairmen of YASED Working Groups. With the interactive participation of YASED members, views were exchanged on priority issues and solution suggestions on the improvement areas of the current regulation and practices.

Other issues conferred upon included changes to the tax laws which were part of the omnibus law, including the increase in the corporate tax rate, the tax audit procedures and requested modifications in the areas of taxes and incentives.

It is expected that the Value Added Tax (VAT) reform, planned for completion during January, will include such changes as: “zero VAT, flat rate, simplification of exemptions, refund of VAT carried over, etc.”.

With the interactive participation of YASED members, suggestions were shared with Mr. Nihat Zeybekci on the role of Turkey as a Regional Governance and Service Center, the investment incentive system and suggestions on economic reforms.

During the meeting, the Minister shared information on current topics as well the economy. It was emphasized that the creation of 1.1 million jobs per year results in a static rate of 10% unemployment; that the female labor participation rate has risen from 22% to 33% over the last 10 years, and that the female labor potential must be realized.

Mr. Zeybekci pointed out that efforts are ongoing on the modernization of Customs Union and various solutions are being discussed to avoid disruption in the trade with the UK following Brexit.

YASED members came together with Ms. Jülide Sarıeroğlu, Minister of Labor and Social Security, at a workshop held in Istanbul on November 30, 2017. During the meeting, labor market reforms and employment policies were discussed.

The Minister gave a speech on their current topics and studies. With the interactive participation of YASED members, this was followed by an exchange of YASED view and solution suggestions on the improvement areas of the current regulation and practices along with members’ studies and activities on employment and labor.

Touching upon the policies regarding the young workforce and female workforce, as part of the Employment Campaign, Sarıeroğlu mentioned that the goal on female labor rate participation for 2023 is 41%. It was further expressed that out of the 6 million jobs created over the last 10 years, 3 million are occupied by females and that the labor force participation rate in the young population in Turkey has gone up by 5.8 percentage points during the last 10 years, while the same metric, over the same period, has declined 2.5 points in the “EU 28”. Speaking on the importance of employment incentives, the Minister indicated that over the 15 years, a total of 86 billion Turkish Lira was provided as incentives.

Underlining the key role of occupational training, the Minister mentioned that the Ministry of Labor will continue to develop qualified labor equipped with the skills demanded by the contemporary market demands and technology.