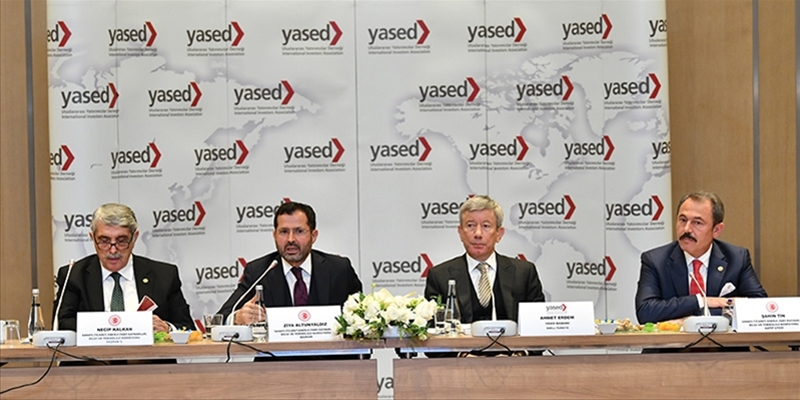 International Investors Association (YASED) Chairman Ahmet Erdem pointed out that for the growth, achieved during 2017, to endure, and to sustain the positive perception of the Turkish economy, work on the improvement of the investment environment must continue unabated.

The International Investors Association (YASED), which is working to improve the investment and business environment in Turkey, as well as to sustainably enhance the global competitiveness of the country’s economy, met with the Chairman of the Committee on Industry, Trade, Energy, Natural Resources, Information and Technology Ziya Altunyaldız, Head of Economy Monitoring and Coordination at Presidency of the Republic of Turkey Hakan Yurdakul and the President of Investment Support and Promotion Agency at the Prime Ministry Arda Ermut in Istanbul on March 19, 2018.

Topics discussed in detail during the meeting included: sectoral and structural solutions aimed at improving the investment environment, suggestions to enhance the profitability and sustainability of investments and, in particular, concrete steps about regulations and applications.

YASED Chairman Ahmet Erdem stated that for the economic growth, achieved during 2017, to endure and to sustain the positive perception of the Turkish economy, structural reforms must continue unabated.

Erdem spoke as follows: “The global economy is undergoing significant changes. The balance between developed and emerging economies is reshaping. Under these circumstances, structural reforms that will uplift our country’s growth potential and enable sustainable growth are of particular importance. According to the preliminary results of the Global Investment Report published by the United Nations Conference on Trade and Development, global investments declined by 16 percent during 2017, retreating to 1.5 trillion dollars; in 2018 however, the figure is expected to grow back to 2016 levels, reaching 1.8 trillion dollars.”

Erdem then continued: “Turkey was among the fastest growing countries last year. The steps taken by the government to support economic growth played a very important role here. For sustainable economic growth, it is important that the support measures, intended to accelerate growth, increase employment and ensure better distribution of income, continue. The faith of International Investors in Turkey’s potential is strong, and their perspective covers the long-term. As YASED, we will continue to support all efforts and structural reforms intended to turn our country into a center of attraction in the global arena, and increase the productivity of investments.”

Members of the YASED Board of Directors and Heads of the Working Groups joined the meeting, where suggestions intended to make the conduct of business and investments easier and more attractive in the country were shared. Speaking during the meeting, the Chairman of the Committee on Industry, Trade, Energy, Natural Resources, Information and Technology Ziya Altunyaldız explained that, despite various unfavorable scenarios, the Turkish economy had a successful year during 2017. He further stated that they expect the Turkish economy to achieve a growth rate in excess of seven percent during 2018, making it the fastest growing nation within G20 and OECD.

Altunyaldız spoke of the two laws, passed recently in the Turkish Grand National Assembly, aimed at improving the investment climate and continued: “The moment an international investor invests in Turkey, we regard them the same as a corporation that is one hundred percent locally funded. As the government, we will do what it takes to assist such corporations and to improve the investment environment. Heretofore, Turkey never let down any international company that has come here, and always helped them profit. Our expectation from international investors is that they use the international know-how they have in such fields as the transformation and digitalization of technology, as well as high value-added manufacturing, to aid in Turkey’s technological transformation. You can become leaders in bringing forth this transformation with your investments. There is great potential in such transformation, especially in the manufacturing and energy sectors. I am confident that you will make the most out of these opportunities, by also making use of the incentives provided by our government.“

Commenting on the opportunities in Turkey, Head of the Economy Monitoring and Coordination at Presidency of the Republic of Turkey Hakan Yurdakul drew attention to the changes and trends in the global economy and the resurgence of developing economies. Pointing to the position of Turkey, he noted that international direct investments play an important role in helping the country turn into an agent of change in the global economy and stated: “Investor initiatives and preferences are evolving in the changing world; standard business models are changing in emerging economies. It is ever more important to be part of the global supply chain. As such, it is important to create an environment where both the international investors and governments can win. The public-private-partnership model holds promise for every sector. As such, localization is crucial for Turkey; the goal of localization is to turn Turkey into a regional manufacturing hub. Domestic and international companies need to create special partnerships to benefit from this. YASED has an important role to play in making this happen and in communicating the opportunities in Turkey.”