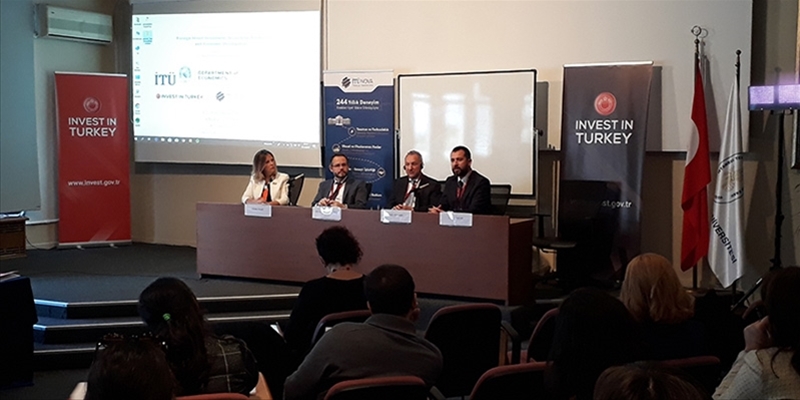 "We believe for Turkey to achieve its objective to become one of the 10 biggest economies in the world by 2023, it should also be within the top 10 rank with the highest attraction of FDI (international direct investments)," said Özlem Özyiğit, YASED Secretary General.

Noting that Turkey’s economy grew by 7.4 in 2017 and by 5.2 in the second quarter of this year, Özlem Özyiğit emphasized that Turkey is one of the countries with the highest growth rate among OECD, G20 and EU countries.

Özyiğit stated that Turkey needs to include continuous improvements in investment enhancement for economic growth in order to be sustainable and in order for  Turkey to maintain its potential to appeal to international direct investors. She continued, "Turkey is a political, economic, geographical, cultural and social bridge. The strategic geographical location of the country facilitates access of companies to markets in the region. This unique geographical location also offers Turkey the opportunity to become a major regional center in the short term. The large and dynamic domestic market in Turkey is a significant differentiating factor between its competitors in Eastern and Southern Europe. We can add factors such as the young population, improved entrepreneurship skills, openness to competition, the ability to adapt to internal dynamics and global changes quickly, the developing infrastructure and the ongoing reform process. In such a conjuncture, looking at Turkey's rank in global FDI and based on the outcome of the FDI UNCTAD World Investment Report, Turkey ranks 26th in world FDI rankings, beingone of the countries with the highest FDI attraction in the "Western Region" countries .. Turkey receives a share of about 1% per year of global FDI flows. Although we think this share is important, we believe that Turkey has the potential to increase its share up to 3%. We think that for Turkey to achieve its objective to become one of the 10 biggest economies in the world by 2023, it should also be within the top 10 ranking countries in the world with the highest attraction of FDI."

Özyiğit: "Countries are in competition for direct investment"

Özyiğit: "We need to switch to an information-based economic structure"

Özyiğit also addressed the works of YASED on increasing the international direct investments of Turkey with the panel and summarized the efforts of the association: "Our mission is to help the international direct investors see Turkey as a country where they can make investments and increase its appeal. As YASED, International Investors Association, our main mission is to support “attracting more value-added investments to our country", which is among the most important targets of our government in the new economic program.   It is not enough only to improve the investment enhancement for Turkey to better utilize its international investment potential, at this point, we think that our government should prepare a plan based on long-term strategies for our country to attract more international direct investments. Aiming to be among the biggest economies globally, Turkey needs to switch to an export-based, information-based and digitalization-oriented economic structure which focuses on R&D activities and increases its competitive power in the global market with high added value products. To decrease the dependency on imports in particular and to increase exports, taking into account the domestic production and best practices globally, YASED will continue to contribute with our international information and experience, in carrying out the technology and R&D investments with public-private cooperation models.”

Felix Allemann, Chairman of the Board and General Manager of Nestle, which has made investments in Turkey for many years and continues to increase them, emphasized that Turkey has an important opportunity to attract investments due to its skilled workforce. Noting that Turkey, with a population of 80 million, provides a bigger growth potential than Germany, Alleman said,"At Nestle, we made investments amounting to 160 billion dollars between 2012-2017. We plan to make another $190 million investment by 2023.  Thanks to its rich natural resources, Turkey has the potential to become the "Garden of the World" in agriculture. However, we see stability as the most important factor for the realization of these investments. In addition, implementation of laws and protection of intellectual property rights are among the most important factors affecting investment decisions. However, Turkey needs to offer competitive terms with the same conditions to all investors to attract more investment. It is also important to accelerate investment-related processes to simplify investment procedures. With significant improvements in these areas, Turkey could attract more foreign direct investment.”

Ayhan Öztürk, the Regional Chairman of Medtronic Turkey, Western Asia and Levant (TWAL), and YASED member, spoke on the panel and noted that establishing "a predictable environment" is one of the most preferential conditions for multi-national companies to develop their R&D, investment, workforce and production processes in Turkey. Öztürk noted that an educated workforce and human resources play an important role for such investments to become sustainable in long-term investment plans.   Öztürk continued, "Companies that operate and invest in the country are a point of reference for the new future international direct investments. Organizations that already know the conditions of the country and operate on a local basis are an important source of information for new future investors. Therefore, it is important to improve the conditions and investment environment, not only for the investments to come from abroad but also for the existing investors to achieve consistency and to plan for creating predictable foundations.”